On our 3rd day in Siem Reap, we set off bright and early to the Taom Village. Before we set off, Sister kindly gave us background information regarding the church that was founded in 2006. We were all perky and looking forward to the visit. With the experience we had at the floating village, we were all ready for the day’s work. 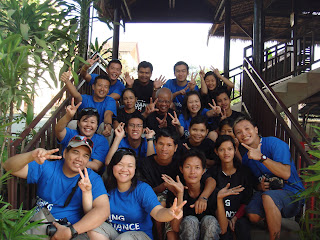 Before setting off, we took a group picture with Father and the volunteers who will be going with us on this trip. 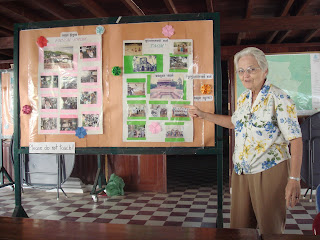 Sister telling us the story behind Village Taom. The church was founded in 2006 and the village is about 75km away from Siem Reap. Sister gleefully warned us about the 2 hour ‘dancing road’ journey. Not knowing what she really meant, we happily packed our things and set off. 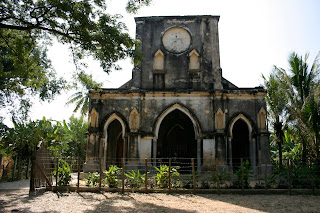 This church had been slowly restored since it was founded. The church hall has been used as a learning centre. If you look closely, you can even see bullet holes on the facade of the church that were left behind during the Khmer Rouge days. 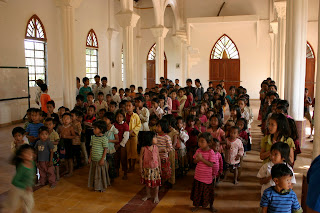 The church hall being converted into a learning centre. Thom, a volunteer, visited the Village from Monday to Wednesday to conduct lessons for the children. Most if not all the families and children are non-Catholics. 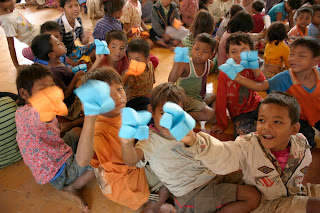 Gaining experience from our earlier visit to the Floating Village, we decided to do a simpler paper craft with the children. So instead of the paper angels, we came up with finger puppets. The instructions are easier to follow and the kids still have loads of fun. 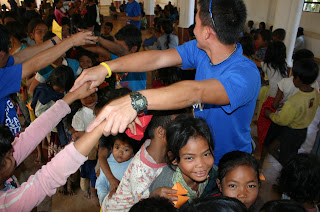 After making the finger puppets, we also played a game of ‘London Bridge is falling down’. Because of the sheer number of children (about 300), we nearly had a stampede. Although the children were not familiar with the words and the song, they enjoyed forming a chain and following the rythm of the song. 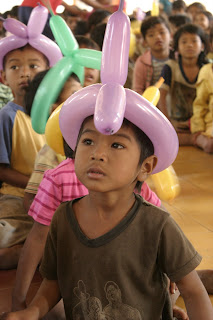 Of course, while some of us played with the children, others were busy doing balloon sculpting so that each kid can have a balloon to bring home with. 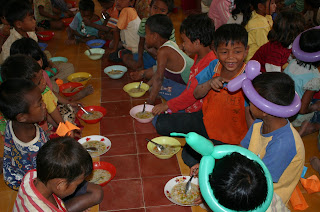 After all the playing and clowning around, it’s meal time! Both Deb and I even volunteer to prepare the rice soup. Let’s just say, cooking for 500 children and adults under the hot sun with no modern kitchen facilities, was not easy. 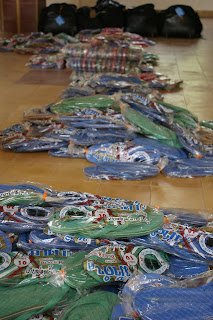 After the meal, we were preparing the stationery and arranging the slippers according to sizes to be given away. 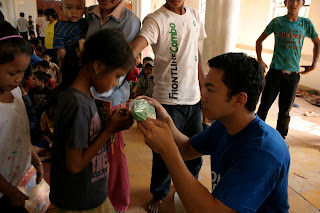 Alvin giving out slippers to a young child. With the help of the Cambodian volunteers, the children lined up in an orderly fashion to receive their slippers. The children were well-mannered and each child would bow and say thanks in Khmer for the gift. 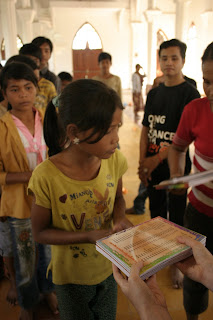 We also gave out stationery to the youths in the village. 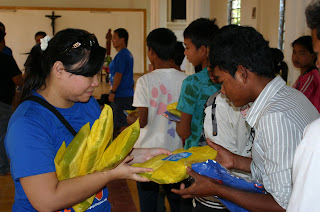 Angeline giving out school uniforms to the youths. These youths were volunteering in the kitchen to prepare the rice soup. They also served as interpreters for us. Most of them spoke very minimum English but we seemed to understand each other. The power of sign language! 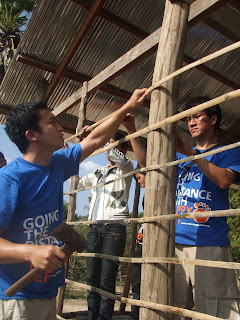 After lunch, we embarked on our next project – building and repairing houses. Honestly, none of us had any experience at all and we did not know what to expect. We split into 2 teams and followed the volunteers into the village. Basically, the frames were set up and all we need to do was to help tied the ‘walls’ onto the frames. Here, Alvin and Manny, nailing the frames to the pillars of the house. 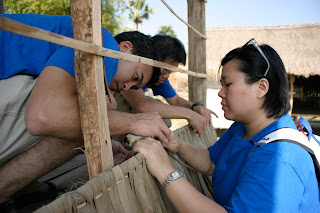 The next step was to tie the ‘walls’ securely with wires onto the frames. These panels of ‘walls’ were actually dried leaves that had been sewn together. We even had to make sure that the right side was being put up, lest the rain may get into the house. 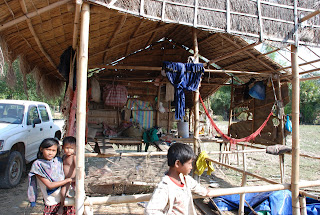 This is the current living condition for most families in the village. It looked just like a straw and wooden house from the ‘3 little pigs’ story. All family members stayed together in this one room structure with no lights. There were no room partitions, no shelves for storage. Nothing at all. Just a plain one room where everyone had a shelter over their heads. That’s the kind of living condition found commonly in Cambodia. 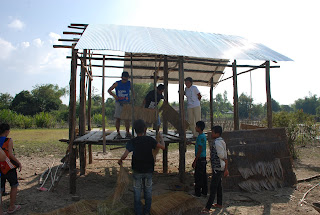 This was the house that Team 2 helped built. The frames and structure had been completed and we helped to put up the walls. 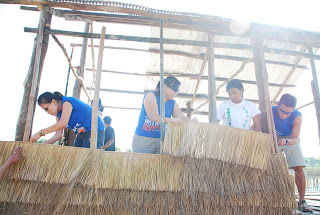 Working under the hot sun and trying our best to secure the walls tightly on the frames. We were worried that the whole walls would come off after a few days so we made sure that we tied the panels very, very tightly to the frames. Of course, you can see from the pictures that we have all rolled up our sleeves, that’s because we did not want to get ugly tanned lines. Ha! 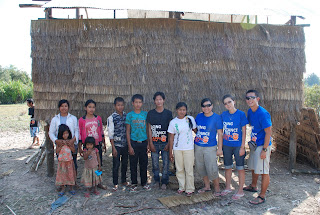 Team 2: Angeline, Deb and Dave taking a picture of the finished product with the family that would be staying there.
At the end of the day when we shared our individual reflections, most shared that they felt a sense of pride when they saw the finished product. Although we were only putting up 2 walls for the house, it was something that none of us had done before. And looking at the families that we built the houses for, we were happy that they could at least have a proper place to stay in for the next few years. We were humbled by this experience. I had never stay in a kampong before and was bought up in a HDB flat where electricity and water are just a switch away. These villagers had to use candles and they had to go to the near by river or well to fetch water. I cannot imagine living in such condition.
Oh, and what about the ‘dancing road’? We finally realised what Sister was talking about. The journey to Village Taom took about 2 hours where 1.5 hours were spent on rocky roads. We were bouncing and swaying inside the van. Despite that, some of us managed to doze off into slumberland. We were very drained and tired at the end of the day but were happy with what we had accomplished. 🙂
Share